‘Information Blindness’ has been prevailing in the country as the authorities concerned are yet to perceive that information could be a supporting force, Distinguished fellow of Centre for Policy Dialogue Dr. Debapriya Bhattacharya said Tuesday.

“There is also a lack of modern mindset on the effectiveness of information towards optimum utilisation of limited resources which is also not consistent with the moderate world,” he said.

The eminent economist also opined that even such dearth in information and data is also not consistent with the development desire of the country as well as its efforts to ensure recovery from the pandemic, attaining the SDGs by 2030 and becoming a developed country by 2041.

Dr. Debapriya made the remarks at a meeting on the use of financial information and right to information towards ensuring transparency and accountability.

Dr Debapriya said the situation of graduation from LDCs has increased the demand for financial information by 100 times. Although the matter is acknowledged verbally, but no such action is still evident.

He said after LDC graduation, sufficient support would not be available if there is no timely supply of full-fledged information. It will also tarnish the country’s image.

He said that financial information is the cornerstone of macro economy while there is also a historical importance of information in formulating financial policies. During the pandemic, he said the global production and supply chain was halted which led to the decrease in demand.

He said it was a matter of surprise that there was no lack of fund for the government but the main problem was to spend that fund. “It was not possible to reach the amounts of the stimulus packages to the targeted Beneficiaries. Although the a2i project helped a lot in digitalisation, it could not help detect the area-wise infection trend of the pandemic,” he said.

Dr Debapriya said even the public representatives were not fully aware of the fact as to what was the overall stimulus package amount, who were the recipients and how much amount was disbursed. The government does not have any split information to face institutional and other problems.

There is a need to create demand for information where the researchers, public representatives and the media would have to play their due role. Such section of professionals could return back the country the sight from blindness, he said.

In his key-note presentation, Towfiqul said that the necessary data and information for framing budget and determining deficit financing are not available from the different government offices.

As a result, Bangladesh is lagging behind in open budget index as the country’s score has declined to 36 in 2019 from 56 in 2015. The latest score of 42 indicates that Bangladesh’s position has downgraded a bit in terms of information.

He alleged that the Finance Division could not often provide necessary information on the income sources of the government in budget, the sector-wise expenditure while there is often confusion in information.

He said that the Finance Division often shows less revenue collection than the National Board of Revenue and such gap has widened compared to the past.

He said there is no such estimation as how much the government is providing in the name of incentives through tax exceptions. But, such estimation is made in other countries ahead of the budget.

He said the government even does not publish the actual amount spent against various social safety net programmes. “But, whatever the government spends come from the people while there should be much more transparency and accountability in utilizing public fund.”

The CPD has been conducting a study in the country on the use of financial information and right to information towards ensuring transparency and accountability. The research paper will be formulated based on the opinions from the researchers, civil society members, public representatives and media personnel. 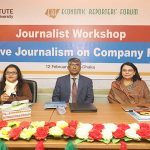 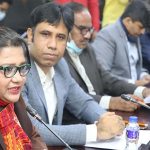 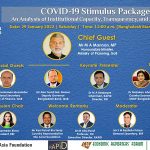