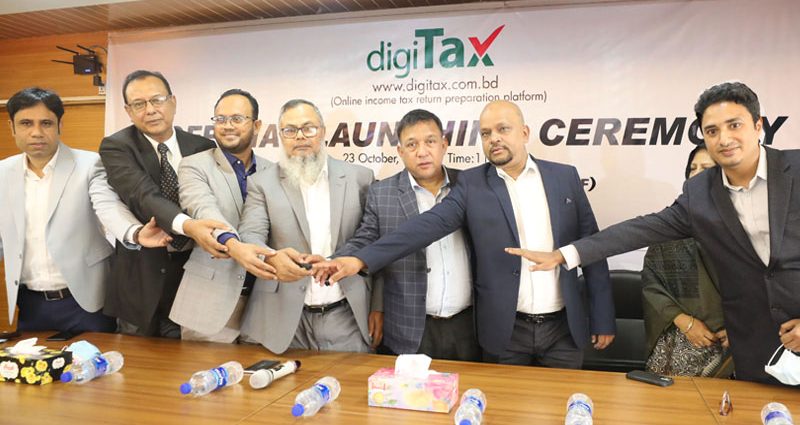 DigiTax, an online tax return preparation platform for taxpayers, was formally launched on Saturday through which the taxpayers can now fill up income tax returns as well as assess their assets online through automated method.

Through using this, the taxpayers can submit their returns and thus pay taxes while staying at home alongside taking income tax-related various services, reports BSS.

Desh Universal came up with this new web application called digiTax to simplify further the submission of income tax returns.

After inaugurating this software, NBR Member Md Alamgir Hossain said that a huge interest has now been developed among the taxpayers to pay income tax while the number of taxpayers is now increasing day by day.

“It’s not possible to give services to such a huge number of taxpayers under the existing system. There is no alternative for making online all tax-related services as well as making automated the return submission system. The NBR has taken this initiative long ago and also had introduced filling up, return submission and payment system through online,” he added.

Alamgir also noted that the march forward of digiTax from the private sector would simplify further the stride towards digitizing tax related services.

He informed that apart from allowing submission of returns through online, the NBR would observe Income Tax Month from November 1 for which an ‘environment of fair’ is being created at the tax zones so that the taxpayers can submit their returns with ease and comfort.

Highlighting the main features of digiTax, its team member Syeda Nusrat Haider said that there many taxpayers of different levels in the country who do not know on how to calculate income tax properly. “As a result, they often can’t file returns properly. In order to resolve this, we’ve come up with a new system through which the users can submit their returns with ease and comfort through giving inputs as per their requirements,”

She mentioned that their system includes an automated calculating system as per the law through which they would be able to prepare their income tax returns. Besides, the users will be able to use this software also in Bangla.

ICAB President Mahmudul Hasan Khusru said that income tax law is one of the toughest laws of the world and it goes through changes every now and then. “digiTax deserves applauds for taking a big stride centering this law,”

He said such initiative of digiTax would help the taxpayers and thus a huge number of taxpayers would feel encouraged to submit their returns. Besides, the revenue collection would also increase.

Earlier in her remarks, digiTax adviser and Desh Universal executive director Mosarat Naima said that digiTax is an automated tax return form fill up web application where tax calculation will be done automatically when the taxpayers would give his or her income-related information after registration.