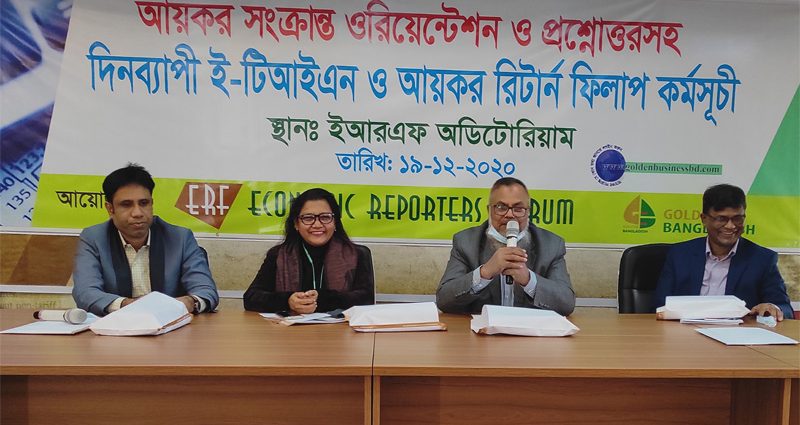 The National Board of Revenue (NBR) is exploring possibilities to make online tax return submission mandatory for salaried taxpayers from next year, said a senior tax official on Saturday.

It is also considering bringing down the rates of withholding tax or tax at source in the next fiscal budget, said Md Alamgir Hossain, income tax policy member of the National Board of Revenue (NBR).

Addressing a workshop on tax return filing at the Economic Reporters Forum (ERF), he said the final demonstration of online return filing modules is likely to be held next February.

The NBR has suspended the online return filing facility, except one tax zone, due to some technical faults in the system.

Golden Bangladesh chief executive officer Md Jahangir Alam said they are ready to extend all cooperation to ERF members to fill up their tax returns and other tax-related services.

ERF president Sharmeen Rinvy said the taxpayers are forced to bear additional costs for taking assistance in tax return filing as it is not easy for them.

She exhorted the NBR to simplify tax return procedures and reduce harassment for encouraging people pay tax. Income tax member Mr Hossain said the number of tax return filers remain an estimated 2.2 million which is around 1.0 per cent of the country’s total population.

“We couldn’t popularise tax return filing through taking required measures,” he admitted. To simplify the system, the NBR has started drafting a new direct tax law and its first draft is likely to be placed for stakeholders’ opinion by next June.

The new law would be drafted in Bangla where taxpayers will find details on return filing in one chapter.

Mr Hossain said taxpayers’ dependency on income tax practitioners or tax lawyers will be reduced to a great extent after enacting the new law. He said the direct tax-GDP ratio remained stagnant regarding the country’s per-capita income and household expenditure.

He said tax net would be expanded if the NBR could simplify the return submission process.