NBR to chase Tk 3.3tn tax target in next FY 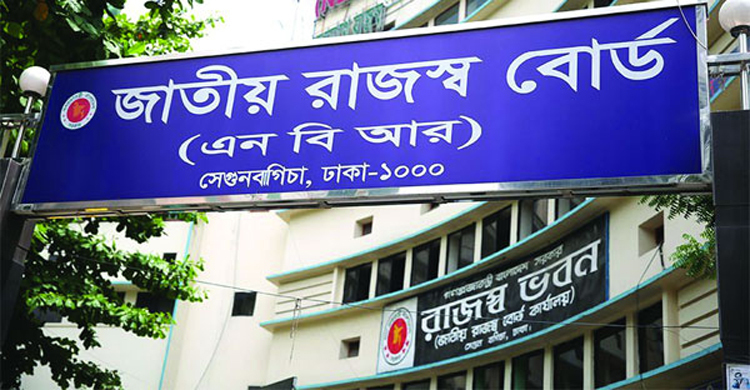 The government has set a Tk 3.30-trillion revenue collection target for the National Board of Revenue (NBR) for the fiscal year (FY) 2021.

The target for value added tax (VAT) collection has been set at Tk 1.28 trillion, followed by income tax at Tk 1.05 trillion and customs duty at Tk 956.52 billion.

For the first time, the target for income tax collection has been lowered by Tk 12.04 billion for the upcoming fiscal, compared with the revised budget goal of Tk 1.06 trillion for FY 2020.

The forthcoming budget may be rolled out on June 11.

In a meeting with the Prime Minister Sheikh Hasina, scheduled for May 5, the finance minister AHM Mustafa Kamal will finalise the size of the budget for FY21.

The finance ministry officials said the budget size has been estimated at around Tk 5.50 trillion for FY 2020-21.

A senior official of the ministry of finance said they have initially set the date of budget announcement, but it may be changed, depending on the COVID-19 situation.

He said the tax collection target would not be revised further for this fiscal, although plan was there to slash it further.

According to an analysis of the past budgets done by the FE, tax revenue collection target for a new fiscal is traditionally set at a level, 30 to 45 per cent higher than the actual receipts in the outgoing fiscal.

However, the NBR officials have yet to do homework on potential revenue loss due to the ongoing lockdown.

A senior income tax official said the arm was able to maintain 6.0 per cent revenue collection growth until April of the current fiscal, thanks to the carry-forward of the levy.

In May, the income tax collection is likely to slump significantly, he said.

The NBR has targets to collect Tk 1.08 trillion in VAT, Tk 1.06 trillion in income tax and Tk 852.21 billion as customs duty during the current fiscal.

Until March or in the last three quarters of the outgoing fiscal, the board collected a total amount of revenue worth Tk 1.65 trillion against the targeted Tk 2.21 trillion.

Tax revenue collection posted a negative growth by 2.73 per cent in the month of March, compared with that of the same period of last year.

Talking to the FE, former NBR chairman Dr Abdul Mazid said the second half of a fiscal year is the peak time for revenue collection, but the COVID-19 has unsettled everything.

Historically, the target for revenue collection has been ambitious as it is imposed arbitrarily on the NBR without any practical consideration, he said.

He said VAT and customs duty collection would suffer most this fiscal owing to the closure of business outlets and decline in imports.