Munshi for more trade with China 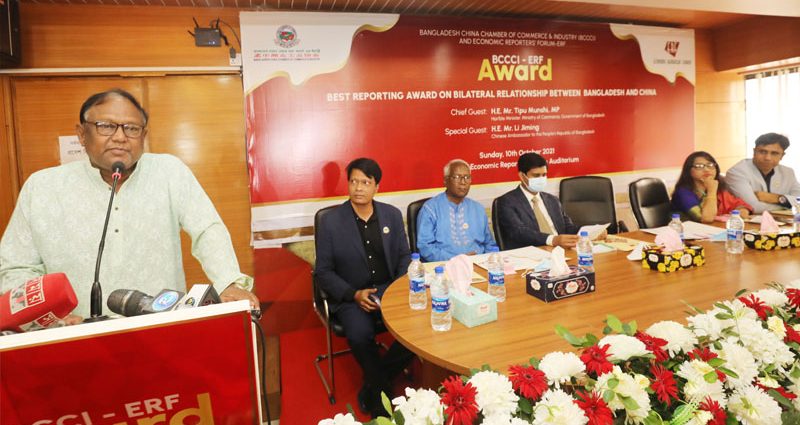 Commerce Minister Tipu Munshi yesterday termed China as a “great friend” to Bangladesh and emphasised the need to enhance bilateral relations between the two with a focus on trade in the days ahead.

“There is no doubt that China is playing a big role in our development efforts,” he said.

The commerce minister made these comments while addressing the “BCCCI-ERF Best Reporting Award on Bilateral Relationship between Bangladesh and China” at the ERF auditorium in Dhaka.

China is the largest supplier of various types of machinery and goods for Bangladesh and it is also the country’s biggest trading partner.

Besides, Bangladesh’s garments industry would have found it difficult to survive the ongoing Covid-19 pandemic had raw material imports from China been halted.

Munshi went on to say that China accounts for nearly half of Bangladesh’s global trade, which really means a lot for the country.

Jointly organised by the Bangladesh China Chamber of Commerce and Industry (BCCCI) and Economic Reporters’ Forum (ERF), Chinese Ambassador Li Jiming spoke on the occasion as a special guest, according to a statement from the ERF.

Jiming said Bangladesh has made remarkable achievements in economic development and also in different socio-economic fields over the last 50 years while the country attained the Millennium Development Goals (MDGs) ahead of schedule.

“I’m sure that Bangladesh is going to graduate from the UN’s list of least developed countries by 2026 and also could be among the top 25 economies by 2030,” he added.

Referring to the issue of development cooperation, Jiming said that everyone should keep in mind the new industrial revolution which is gaining momentum with the emergence of new business models and the digital economy.

“The Covid-19 pandemic has provided new opportunities for countries like Bangladesh to leapfrog into developing ones,” he added.

The Chinese ambassador went on to say that Chinese President Xi Jinping during his address at the just concluded 76th United Nations General Assembly (UNGA) had proposed a global development initiative which would pursue stronger, greener and healthier global development.

“I hope Bangladesh will actively support this global development initiative, which will also be the guideline for future Bangladesh-China trade and economic relationships,” he said.

Jiming invited Bangladeshi businesses and the commerce minister to take part in the upcoming China International Import Exposition and the Canton Fair, to be held in China.

Munshi, along with the distinguished guests, distributed awards to the 10 best reporters in 10 different categories. Each of the recipients received a crest, certificate, and cheque of Tk 50,000.

Munshi for more trade with China