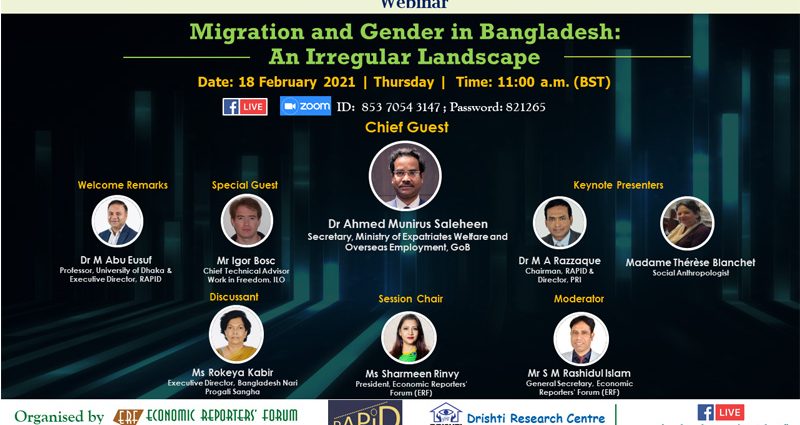 Cost of female migration has decreased while that of male migration marked a rise, reflecting that demand for domestic workers is high, according to a study released yesterday.

The survey, conducted by Drishti Research Centre (DRC) and The Research and Policy Integration for Development (RAPID), said Bangladesh’s female migrant workers were present in 22 countries and Saudi Arabia accounts for 37 per cent of the total female workers.

Female workers’ migration abroad began to rise since 2004 and the spiralling trend continued until 2017. Later the outflow declined but remained over 100,000 until 2019. The number of women workers going abroad for jobs dipped in 2020 amidst the devastation done by the pandemic.

The bilateral agreement that the Bangladesh government signed with Saudi Arabia in February 2015 opened a new area. Visas for women became plentiful and migration was declared free of costs, according to a paper presented at a virtual discussion jointly organised by Economic Reporters’ Forum (ERF), RAPID and Drishti Research Centre (DRC).

Occupations prior to migration show that if 55.8 per cent of the women were home makers, 16 per cent were factory workers.

Regarding the findings of the survey, Abdur Razzaque, chairman of the RAPID, said in some cases the migration cost for a male was 16 times higher than the female migrant workers.

For instance, the number of female workers also declined in the garment sector, the highest employment generating sector inside of the country.

Few years ago when the country used to export $20 billion worth of garment items, the number of female garment workers was high.

When the apparel export reached to $34 billion, the number of garment workers declined because of use of machineries in the garment sector, he said.

The number of female garment workers has been declining also because of the migration of a higher number of those workers abroad as there are ample opportunities abroad, he said.

However, the female workers have to face a lot of trouble abroad, which the government needs to work on to improve their conditions abroad.

Ahmed Munirus Saleheen, secretary to the Ministry of Expatriates’ Welfare and Overseas Employment (MoEWOE), said the government has been working with different countries to ensure better working condition abroad where Bangladeshi female workers are employed.

For instance, the verdict on the Abiron Begum killing case in Saudi Arabia came in favour of the victim. The ministry worked a lot so that Abiron’s relatives are ensured justice, he said.

Moreover, his ministry has been working to send 1,000 males and females from each upazila under the ministry’s facilitation, Saleheen said.

He also said 1,000 male and female workers from each upazila would be selected in a random basis and they will go abroad at their own cost but the ministry will facilitate them, the secretary said, adding that this project would be implemented in less than one year.

While she was talking on the topic ‘Migration and Gender in Bangladesh: an irregular landscape’ Thérèse Blanchet, director of the DRC, said the survey is part of a series of studies conducted by the DRC in collaboration with the RAPID under the Work in Freedom project of the ILO.

In each district, a union was selected for survey and all migrant households within the union visited. In all, 8,437 migrant workers were recorded in 125 villages. Women migrant workers represent 15.7 per cent of the total, she also said.